I wrote a book about about genetic algorithms and machine learning. You can buy it here. 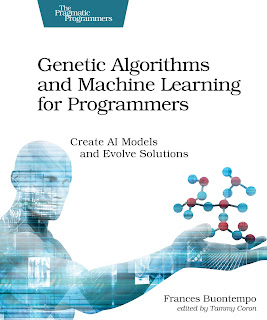 The so-called particle swarm algorithm can be used to find optimal solutions to problems. It's commonly referred to as a particle swarm optimisation, or PSO for short. PSO is often claimed to be based on the flocking behaviour of birds. Indeed, if you get the parameters right, you might see something similar to a flock of birds. PSO are similar to colony algorithms, which are also nature inspired, and also having agents collaborating to solve a problem.

Suppose you have some particles in a paper bag, say somewhere near the bottom. If they move about at random, some might get out of the bag in the end. If they follow each other, they might escape, but more likely than not, they'll hang round together in a gang. By providing a fitness function to encourage them, they can learn, for some definition of learn. Each particle can assess where it is, and remember the better places. The whole swarm will have a global best too. To escape a paper bag, we want the particles to go up. By inspecting the current (x, y) position, the fitness score can be the y-value. The bigger, the better. For real world problems, there can be many more than two dimensions, and the fitness function will require some thought.

The algorithms is as follows:

The particles' personal bests and the overall global best give the whole swarm a memory, of sorts. Initially, this is the starting position for each particle. In addition to the current position, each particle has a velocity, initialised with random numbers. Since we're doing this in two dimensions, the velocity has an x component, and a y component. To move a particle, update each of these by adding the velocity, v, in that direction to the current position:

Since the velocity starts at random, the particles move in various different directions to begin with.  The trick comes in when we update the velocity. There are several ways to do this. The standard way adds a fraction of the distance between the personal best and global best position for each particle and a proportion of the current velocity, kinda remembering where it was heading. This gives each a momentum along a trajectory, making it veer towards somewhere between its best spot and the global best spot. You'll need to pick the fractions. Using w, for weight, since we're doing a weighted sum, and c1 and c2 for the other proportions, we have:

If you draw the particles moving around you will see them swarm, in this case out of the paper bag. 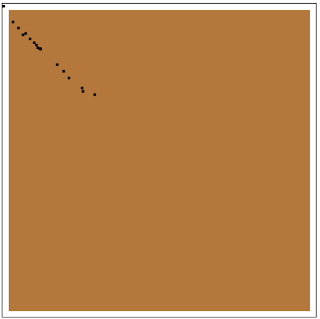 This is one of many ways to code your way out of a paper bag covered in my book. When a particle solves a problem, here being out of the bag, inspecting the x and y values gives a solution to the problem. PSO can be used for a variety of numerical problems. It's usually described as a stochastic optimisation algorithm. That means it does something random (stochastic) to find the best (optimal) solution to a problem. You can read more here.