The ACCU conference happened in Bristol again this year. For my first time ever, I was at a workshop. In fact, I ran a work shop with Chris Simons. We talked about Evolutionary Algorithms in practice. We gave a 90 minute talk later in the week, using the same Java framework (JCLEC), with slides here. High level summary: can your computer solve problems using a few random guesses and iteratively improve, using crossover (merging together previous attempts) and mutation (nudge things up or down, or flip bits). Answer yes: we managed to turn on all the bits in an array, code our way out of a paper bag (by firing virtual cannon balls based on an old Overload article), and finally in the 90 minute workshop, we generated code for Fizz Buzz.

The full schedule is here. Having five tracks meant I missed lots, but talks will appear on the YouTube channel over time. I'll just give brief notes on a handful of talks I attended. The opening keynote was "Delivering software that is secure and usable - who’s job is it?" by  M Angela Sasse. Angela called out StackOverflow being functionally great but the security advice being bad, in contrast to using an official manual, wherein the security advice is great but it's functionally worse. This was based on measuring several developers attempting to use a software product. How can you actually measure security or usability? How are you currently measuring it? Mention was made of hard to follow security rules, which people tend to work around. Angela called for a way to reprogram the security experts. How good are they at conflict resolution? Do they have social marketing skills? Twitter devolved into quips about social engineering at that point.My final note says,


Programmers are tribal and seek approval. Try to trust and collaborate instead.


Finally, you sometimes need to start going into detail


There was a discussion about flame graphs at the end, and he mentioned "How to read a book: the classic guide to intelligent reading" by Alder and van Doren. This points out you don't need to read a non-fiction book in order. Jump around, follow back links, jump straight in to what you want to learn. Very non-linear.

Next, I'll talk about "The anatomy of an exploit" by Patricia Aas. She started by mentioning the weird machine. You can see most programs as a finite state machine. An exploit jumps out of the finite states into other, unintended states. She looked at CWE-242; a list of potentially dangerous functions. The CWE is the common weakest enumeration, available online, listing things to avoid. Her talked pulled on things that might go wrong with gets or std::cin. Surprisingly, you get more warnings from C than C++. By disabling warnings, one at a time, we ended up with code to get a prompt. Once you have a shell on another machine, you can then do a variety of nefarious things.  She covered loads of things including ASLR; address randomisation, heap grooming and use after free. Security was a definite theme at this conference, and many developers understand far too little about it.

Herb Sutter gave Thursday's keynote on "De-fragmenting C++: Making exceptions more affordable and usable". He called out a divide between teams who can and who cannot use exceptions. Many libraries have a mix of exceptions and return code. He said "Pick a lane". C++ is supposed to be zero overhead


This is not true for exceptions. He considered the difference between program recoverable and non-recoverable errors. What can you do about stack exhaustion, for example? Who do you report problems to? Humans or code? Exceptions are automatic (a good thing) and invisible (a bad thing). He sketched out ways we could make exceptions have zero overhead. What this space.

Anthony Williams then talked about aysnc, executors and callbacks: "Here’s my number; call me, maybe. Callbacks in a multithreaded world". He called out a few things to be aware of. Does the order of your callbacks matter? Can you deregister them? He encouraged us to capture by value, rather than reference, unless we have a really good excuse.

At lunchtime, there was a book signing. I sold several copies of my book; "Genetic Algorithms and machine learning for programmers." Three others,  Anthony Williams, Ivan Cukic, and Jonathan Boccarra were also selling books, but I didn't get a chance to go talk to them. Thanks to ACCU for the chance to do this. I put mine in paper bags, and even wrote a receipt on one. The chapters in mine show how to code your way out of a paper bag, so it seemed sensible. 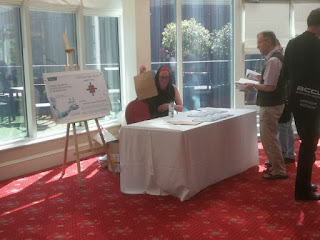 I gave a session with Chris Simons about how to teach your computer to code Fizz Buzz. We plan to write this up for ACCU's Overload magazine shortly.

On Friday, Paul Grenyer gave the keynote. He reminisced about people he'd met when he was an ACCU member, and all the things he'd done, some that worked and some that didn't, in Norwich, to grow the tech network. There's now a background discussion on accu-general and accu-members email lists about how to revive some things we used to do, and find new things to do, that will be valuable to the group. I'd love to see the mentored developers reboot.

Next, I went to "Interactive C++ : Meet Jupyter / Cling - The data scientist’s geeky younger sibling" by Neil Horlock. He talked about Code Club, and teaching people. This led nicely into using Cling/Jupyter to have notebooks for C++. Cling is an interactive (JITted) version of clang. I can't do his talk justice here. It was amazing. It managed to cope with templates, and a variety of things that blew my mind. He demonstrated using RISE to make RevealJS slides from a notebook, so I think I was watching a talk in a talk in a talk.

My notes have run out at this point. At the speakers' dinner we met EchoBorg. An actor (an echoborg) voiced the words of a chatbot. People volunteered to be interviewed to become an echoborg themselves. This set of cyberpunk style SciFi in my head. Again, I won't do it justice, but watching the conversation develop was incredibly interesting. Have a look at their websites: 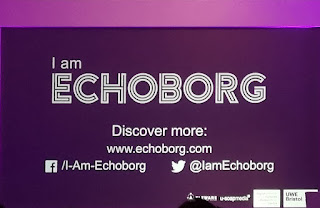 I went to two talks on Saturday: "Windows Native API" by Roger Orr and
"Best practices when accessing Big Data or any other data!" by  Rosemary Francis. I was too tired to make notes by that point, and we left early, since we had a three hour drive home. Rog considered several ways to return 42 from a program and showed several steps that happen before main; something people don't always consider. He touched on security too. I didn't stay to the end of Rosemary's, but she was talking about tooling her company has developed to watch programs using big data and tracing bottlenecks. In my opinion, many data scientists make mistakes some programmers might avoid. Her first example was opening and closing a file in a loop. I wish machine learners and programmers could talk to each other more and help each other out.

I had a great conference, and the includecpp crew were there. I dipped in and out of the discord chat. It's lovely to see people supporting each other. Simple things, like chats about where to go for dinner.

Echoborg has left dystopian Sci-Fi short stories brewing in my head, and the Jupyter/cling talk left me with lots to explore. Thanks ACCUConf. Hope to be there next year.